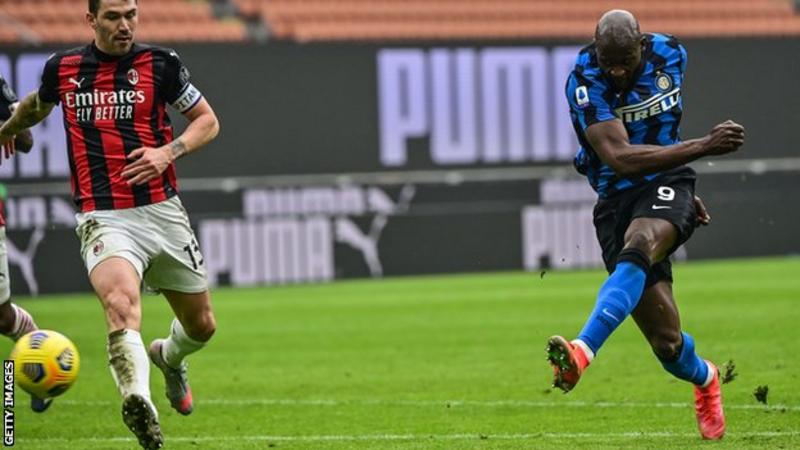 Lautaro Martinez’s two goals helped Inter Milan to an impressive derby win against AC Milan as they opened up a four-point gap at the top of Serie A.

The striker’s early header laid the platform for a confident Inter display.

Zlatan Ibrahimovic twice went close to equalising for Milan but the hosts were then caught out chasing the game.

A fine team move saw Martinez tap in his second then Romelu Lukaku finished another incisive counter attack with a low drive into the bottom corner.

While the normal raucous atmosphere that usually greets this fixture will have to wait until fans return to stadiums, supporters of both clubs lined the route to the ground, underlining the significance of the match.

This was the first time the sides had met while occupying the top two positions in Serie A since April 2011.

On that occasion AC Milan went on to win the Scudetto after a 3-0 win and having emulated that scoreline Antonio Conte will feel his Inter side are well placed to lift their first title since 2009-10.

It was an unhappy way for Milan goalkeeper Gianluigi Donnarumma to mark his 200th Serie A appearance.

The 21-year-old, who is the youngest player to reach the milestone, beat the previous record set by legendary keeper Gianluigi Buffon by more than two years.

While his opposite number Samir Handanovic made important stops to prevent both Ibrahimovic and Sandro Tonali from equalising as Milan poured forward after the break, Donnarumma stood no chance with any of the goals.

Champions Juventus are 11 points behind Inter, although they have two games in hand on Conte’s side.