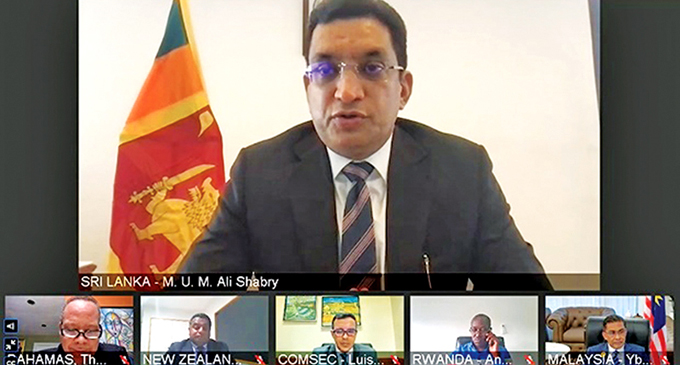 A special virtual meeting of Law Ministers was convened to discuss legal implications of the pandemic – in particular on access to justice, upholding the rule of law, and equitable access to essential medicines and equipment. Justice Minister Ali Sabry, PC, chaired the meeting.

Commonwealth countries have recorded more than 19 million Covid-19 cases and 370,000 deaths.During their meeting, Law Ministers shared their views and experiences of legal challenges which have arisen amid the pandemic. Ministers stressed how lockdowns, social distancing, and other emergency measures affected courts and the administration of justice.

It was noted that the pandemic has accelerated the digitalisation and modernisation of judicial services, with technology such as video-conferencing being widely used in courts in many Commonwealth jurisdictions.

Ministers agreed on a range of outcomes from the meeting, including a commitment to work collaboratively to support timely and equal access to vaccines for the Commonwealth and all other countries.

They also issued a plea to Governments to provide adequate resources to ensure the realisation of equal access to justice for all in the Commonwealth.

Opening the Law Ministers meeting, Commonwealth Secretary-General Patricia Scotland said: “Most countries in the Commonwealth are yet to receive vaccines. There is a real need for increased international co-operation to ensure that no one is left behind.

“We are all in this together. No one country is safe until we are all safe. The pandemic knows no territorial boundaries.”

The Secretary-General spoke of the pandemic’s “untold damage” to justice systems and the increase in barriers to equal access to justice, especially for women and girls. Cybercrime, including online child sexual abuse, and domestic violence have risen.

Backlogs in civil and criminal cases have also increased; which has exacerbated long-standing justice challenges such as high costs, delays, and complexities associated with dispute resolution.

She added: “I know that the strength of the Commonwealth family will help us all to pull through, and build back better, leaving no one behind. Improving justice will be the pillar and foundation of our new normal.”

Sri Lanka’s Justice Minister Ali Sabry said afterwards: “In these challenging times, it is a source of strength to have global partners working together. In bringing together its members to share their experiences, expertise, and solutions, the Commonwealth family has united us all in our resolve and is a beacon of hope in moving forward to find answers to an issue of unprecedented magnitude.”

He said “no part of the world will be safe from Covid until all parts of the world are safe” and stressed the need to work together as Commonwealth nations and the broader international community in the fight against the virus.

Canada’s Justice Minister and Attorney-General David Lametti, said: “As countries around the world deal with the challenges the pandemic poses to their legal systems, promoting access to justice and ensuring the rule of law are key priorities for Ministers of Law.

“It was great to connect with Commonwealth Law Ministers to support and learn from each other as we continue our work to advance equal access to justice for all during the pandemic.”