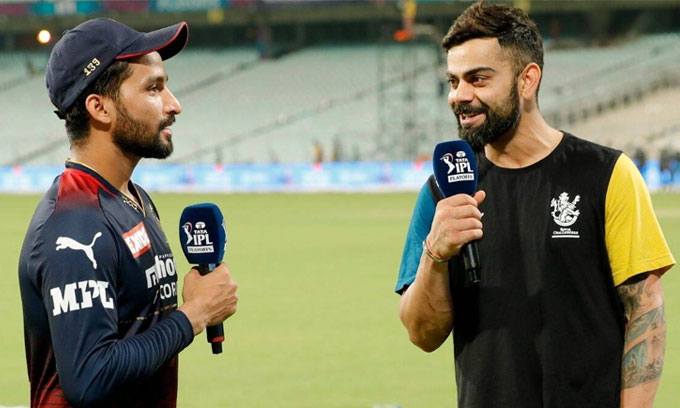 (UTV | INDIA) – Virat Kohli couldn’t keep his calm as Rajat Patidar went onto smash his maiden century at the IPL 2022. The ex-skipper was seen sitting in rapt attention as he waited for Patidar’s century with bated breath. Once the hundred came, Kohli was seen screaming his lungs out while shouting “come on” from the dugout.

The 28-year-old, who went unsold at 2022 auctions, was called into the side as a replacement to injured batter Luvnith Sisodia, and he made an impact straight away as he walked in at the fall of Faf du Plessis. While most of the star-studded RCB batters struggled for timing, the 28-year-old looked effortless with his slices, punches, counter-punches and drives to tower over the rest.

He along with Dinesh Karthik (37 not out from 23 balls) put on a match-turning unbroken partnership of 92 runs from 41 balls as RCB scored 84 runs in the last five overs to prop up the total.

First, he showed the glimpses of his stroke-making skills to slam Krunal Pandya for three boundaries and one six inside the power-play to overshadow Kohli in a 66-run partnership from 46 balls.

Kohli had the opportunity to bat with Patidar a number of times this season, firstly against Gujarat Titans and then on Wednesday. He recalled what he told the youngster at the Eden Gardens.

“I told him as well after the game as well that I have seen many impact innings and many innings under pressure over so many years. I have not seen many better than how Rajat played today. Under pressure, big game, first uncapped player,” Kohli said.

“The magnitude of the game was so big that I was feeling the tension in the air because I have been in those situations where you have to cross the line as a team.”

“What he did was very very special, I don’t think that anyone should take that for granted. You should understand the excellence of the innings and appreciate as a cricketer to watch an innings like that,” Kohli added.