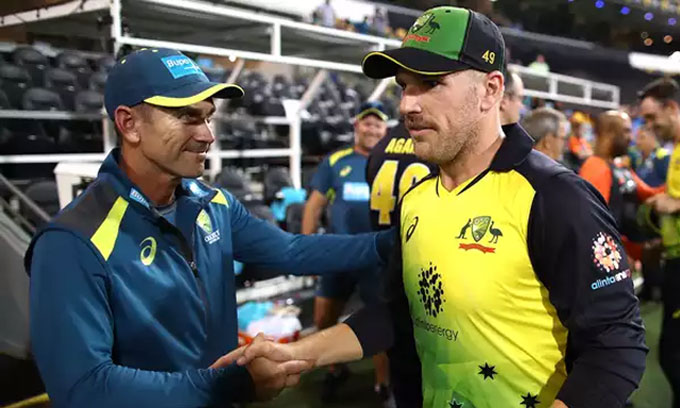 Australia’s white-ball captain Aaron Finch said he had ‘no idea’ about Cricket Australia’s process over Justin Langer’s reappointment but endorsed his coach for having done an ‘amazing job’ over the last few months.

Langer’s contract extension has been the subject of much debate in Australian cricket circles with a new deal still to be presented to the former Australia opener after both he and the board agreed to hold off discussions until after the Ashes.

With the Ashes now in the bag with an emphatic 4-0 scoreline, calls for his re-signing have grown louder with former Australia cricketers including Ricky Ponting and Adam Gilchrist publicly questioning why the impasse has continued.

Finch, who partnered with Langer to win Australia’s first men’s T20 World Cup in November, expects to be consulted about the role, along with Test captain Pat Cummins.

“To win the World Cup when no-one really gave us a chance and then dominate the Ashes 4-0, was super impressive. I’m not going to comment on what CA’s process will be, but he has done an amazing job in the last few months in particular,” Finch said on Friday (January 21).

“Whatever happens from the CA side of things, that’s out of our control as players. His contract is up, no doubt there will be some talk there. Patty (Cummins) and myself might be contacted. I’ve got no idea. I’ve never been in the leadership role when someone’s coaching contract has been up. But like I said, he’s done an unbelievable job and to see how good the environment has been throughout the T20 World Cup and then the Ashes is a credit to everyone involved.”

Langer, whose current contract runs out in June this year, has made it clear he wants to continue in the post having addressed voices of dissent from within the playing group last year.

“No never edgy, whatever happens [with the job],” Langer told. “Before the World Cup and before these Ashes, we’ve never ever been better prepared. It’s not a coincidence we’ve had the success we’ve had.”

“We’ve done some extraordinary things the last few months. But we haven’t played much Test cricket over the last couple of years because of the Covid situation. Our next big challenge is to start winning overseas now. We’re all aware of that, we’ve got a really good team. So many guys have stepped up this summer and it’s so exciting to watch, it’s been an incredible brand of cricket. We’re excited about our next big challenge of winning Test matches overseas.”