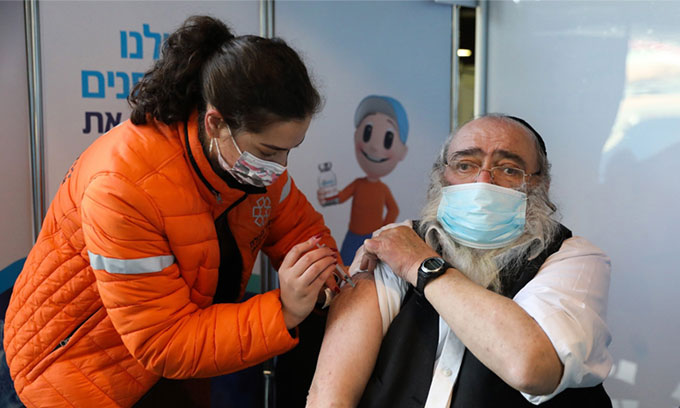 An Israeli hospital administered fourth Covid-19 vaccine doses on Monday to a test group, as the country considers approving the measure for vulnerable populations in a bid to outpace a surge in infections fuelled by the Omicron variant. The Sheba Medical Centre study in Ramat Gan outside Tel Aviv “will zero in on efficacy of the vaccine in producing antibodies, and safety, in order to ascertain if a fourth vaccine is needed in general”, a spokesman said. The 150 subjects are all medical staff.

A health ministry expert panel last week recommended that Israel become the first country to offer a fourth vaccine dose – also known as a second booster – to those aged over 60, those suffering from compromised immune systems, and medical workers. But the fourth shot awaits final approval by the ministry’s director-general, Nachman Ash. Britain’s early deployment of the Oxford-AstraZeneca vaccine to protect against Covid-19 may be responsible for the country’s lower death rates compared to other European countries, a UK vaccines expert has said.

Dr Clive Dix, former chairman of the UK’s Vaccine Task Force, told that the Oxford-AstraZeneca vaccine – manufactured and administered in India as Covidshield – may offer stronger long-term protection against severe Covid-19 and death. Australia reported more than 10,000 daily Covid-19 cases for the first time since the start of the pandemic amid the rapid spread of the Omicron strain. New South Wales on Monday recorded 6,324 cases, with 55 in intensive care among 520 people in hospital. The most populous state also reported its first known death from the Omicron variant – a man in his 80s with underlying health issues who had received two doses of vaccine and became infected in his nursing home.

Britain’s government will not introduce new Covid-19 restrictions for England before the end of 2021, its health minister Sajid Javid said on Monday. About 8,300 flights were grounded and tens of thousands more delayed on the weekend – one of the year’s busiest travel periods – with multiple airlines saying that Omicron spikes caused staffing shortages.