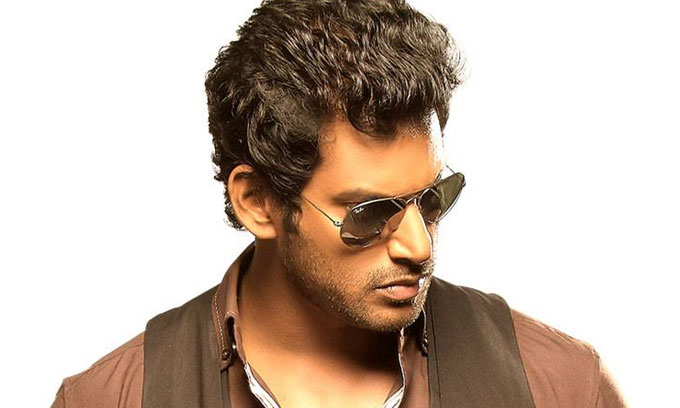 Vishal who was last seen in the recently released action drama, Enemy, is all set for his next outing. Vishal’s next release in Kollywood will be “Veeramae Vaagai Soodum” which is currently in the final stages of post production. Earlier today (November 23), the makers made the official announcement on the release plans of Veeramae Vaagai Soodum and it has created a sensational buzz on social media. The film has been announced to hit the screens on January 26, 2022, on Republic Day and it is going to be interesting to see how the film will fare at the box office.

The film was earlier announced to release in theatres in December 2021, but the makers have now postponed the release by a month. January 26, 2022, will be the new release date of the Vishal starrer. Veeramae Vaagai Soodum is directed by debutant Thu Pa Saravanan and has music composed by Yuvan Shankar Raja. Dimple Hayathi will be seen playing the female lead, while popular dubbing artist Raveena Ravi and SPR Akilan form the supporting cast. Notably, Veeramae Vaagai Soodum will mark Dimple Hayathi’s first film as a lead actress in Tamil cinema. Kavin Raj of “Ispade Rajavum Idhaya Raniyum” fame has handled the cinematography for the film which has editing by NB Srikanth and art direction by SS Moorthy.

Anl Arasu, Ravi Varma, and Dinesh have taken care of the stunt choreography. Veeramae Vaagai Soodum is produced by Vishal Film Factory. Veeramae Vaagai Soodum is expected to be an action packed entertainer that will have a strong emotional quotient to strike a chord with the audience. Vishal is currently busy shooting for his next film “Laththi” which is directed by debutant A Vinoth Kumar. “Laththi” features Sunainaa as the female lead and has music composed by Sam CS. Ramana and Nandha are producing this film under the banner of RaNa Productions.