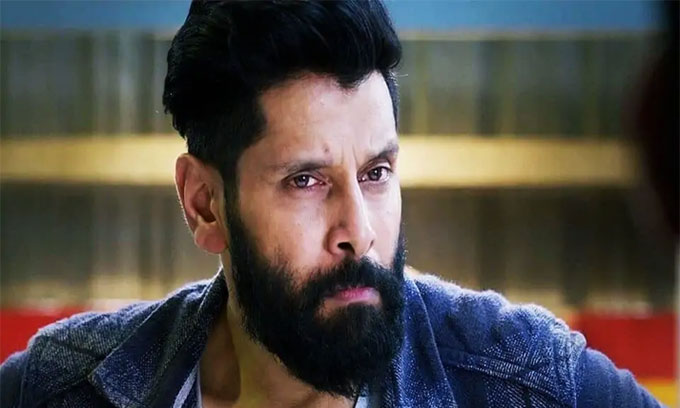 National award-winning actor ‘Chiyaan Vikram’s upcoming film “Cobra” being directed by ‘Demonte Colony’ and ‘Imaikkaa Nodigal‘ fame Ajay Gnanamuthu has entered its final schedule. The update was provided by Ajay on his Instagram Story, who shared a behind-the-scenes photo from the film’s sound stage set, which has been covered completely by green screens. He captioned the pic, “Finally…Final schedule,” while expressing his joy at being “back at work”. Although their faces aren’t completely clear, we see Vikam and Ajay engaged in a conversation about an important scene in Cobra.

Touted to be an intense action thriller with plenty of espionage elements, Cobra is being described to be an ambitious project and will see the application of mathematics as a core element in the film’s story. The teaser for Cobra , which was released earlier this year, showed Vikram as an intelligent mathematician on a secret quest around the world, with the first visuals receiving stellar feedback from fans. For a while now, there has been talk surrounding Cobra skipping a theatrical release and opting for a direct OTT premiere. However, there has been no official announcement regarding it and a statement is being awaited by fans, who are keeping their fingers crossed in the hopes of witnessing Vikram’s magic on the big screen in Cobra.

Being produced by Lalit Kumar’s 7 Screen Studios, Cobra also includes Academy Award-winning composer A. R. Rahman, whose romantic melody track ‘Thumbi Thullal’ turned out to be a chart-buster. The film will see Vikram locking horns with former Indian cricketer Irfan Pathan, who is making his acting debut, with his character revealed to be a French Interpol officer. Likewise, Cobra will see Vikram romancing KGF heroine Srinidhi Shetty, who as well is making her Tamil cinema debut, with the supporting cast featuring names like Miya George, Super Deluxe fame Mirnalini Ravi, Roshan Matthew, Anandaraj, KS Ravikumar and others in pivotal roles.