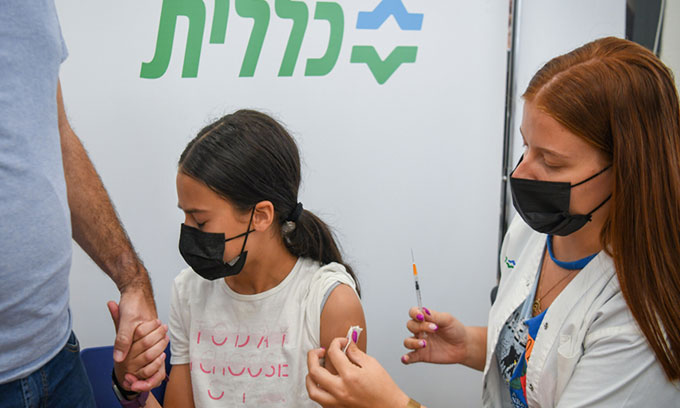 (UTV | COLOMBO) – To ward off another Covid-19 wave, Israel vaccinates children as young as 5

As infections start to creep up again, Prime Minister Naftali Bennett has said the country is experiencing a “children’s wave” with about half of the recently confirmed cases among children below the age of 11, he wrote on Facebook. Israel began rolling out Covid-19 vaccines for children aged 5 to 11 on Monday, becoming one of a handful of countries to inoculate children so young as it seeks to ward off another pandemic wave. Over the summer, the Jewish state experienced an upsurge in coronavirus infections, fuelled by the Delta variant, and launched one of the earliest campaigns for booster shots.

Authorities had already begun immunising those aged 12 to 17 but decided to lower the age threshold in the wake of trials by Pfizer and recommendations from a panel of Israeli scientists. While the campaign for younger minors was set to officially start Tuesday, doses were already being administered by Monday night, an AFP team in Tel Aviv found. “Right now during the epidemic, the best tool to protect our children is vaccination,” said Heli Nave from outside a clinic giving the Pfizer-BioNTech jabs to children. She said “it is not an easy decision at all” but the availability of data from the United States which started immunising 5-to-11-years-old earlier this month had convinced her.

The prime minister is scheduled to have his own youngest son vaccinated on Tuesday morning, his office announced. Israel was one of the first countries to launch vaccines against the coronavirus last year thanks to a deal with Pfizer that gave it access to millions of doses in exchange for data on the vaccine’s efficacy. More than 5.7 million of the country’s nine million people are now fully vaccinated.