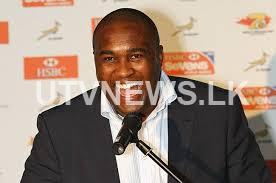 Ntunja, 38, became a renowned rugby commentator in his native language of Xhosa after retirement in 2008 having also led the junior Springboks.

In 2018 he introduced Siya Kolisi to the field at Ellis Park as the back-rower become the first black skipper of the senior Springboks side.

“I am deeply saddened by the passing of such an amazing character whose powerful voice will forever be remembered in rugby commentary. R.I.P Kaunda,” Tendai Mtawarira, who won the Rugby World Cup with the Springboks last November, tweeted. South Africa’s 1995 World Cup-winning fly-half Joel Stransky worked with Ntunja on his numerous broadcasts.

“Absolutely gutted to hear the tragic news of the passing of our friend and colleague Kaunda Ntunja. A true gentleman and lover of our beautiful game! Larger than life in all ways! RIP Kaunda!!” Stransky said.

NEWER POSTParis Hilton reveals she still has ‘nightmares’ about her past
OLDER POSTJapan must tackle sports abuse before Olympics: activists