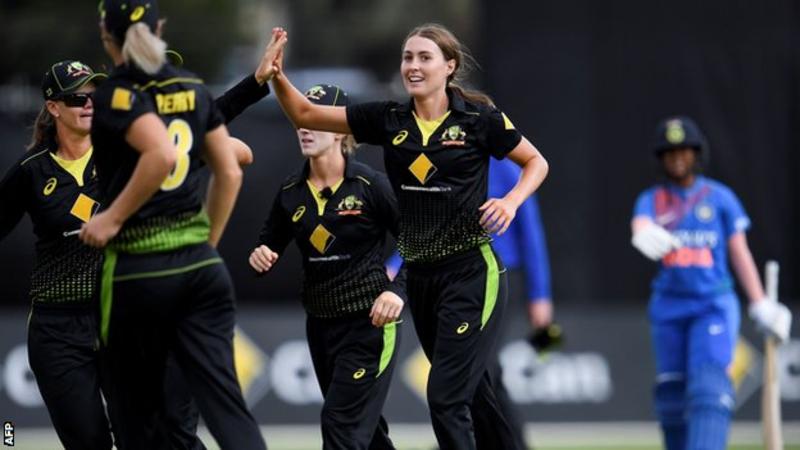 (UTV| Women’s Cricket) – Australia beat India by 11 runs to win the final of the women’s Twenty20 tri-series in Melbourne.

Beth Mooney hit an unbeaten 71 from 54 balls before Rachael Haynes made 18 off seven balls to help the hosts to 155-6.

Smriti Mandhana replied with 66 from just 37 balls as India moved to within 41 runs of victory with 35 balls and seven wickets remaining.

But Jess Jonassen claimed 5-12 as India collapsed to 144 all out, losing their last seven wickets for just 29 runs.

Left-arm spinner Jonassen was named player of the match while Mooney received the player of the series award, having also hit half-centuries in two of Australia’s three group games.

Victory cemented Australia’s status as favourites to win the women’s T20 World Cup, which begins in Sydney on 21 February.

The hosts chose to bat after winning the toss and despite losing Alyssa Healy (4) in the first over, Mooney led the recovery with Ashleigh Gardner and captain Meg Lanning.

They both made 26, helping Australia to 107-2, before Haynes’ quickfire contribution took them past the 150 mark.

Although India lost Shafali Verma (10) in the second over of their reply, by the 15th they had got themselves in a strong position at 115-3.

But Nicola Carey made a superb catch off Megan Schutt to dismiss Mandhana and that sparked the collapse, with Jonassen removing India captain Harmanpreet Kaur and Arundhati Reddy in the following over. (BBC)