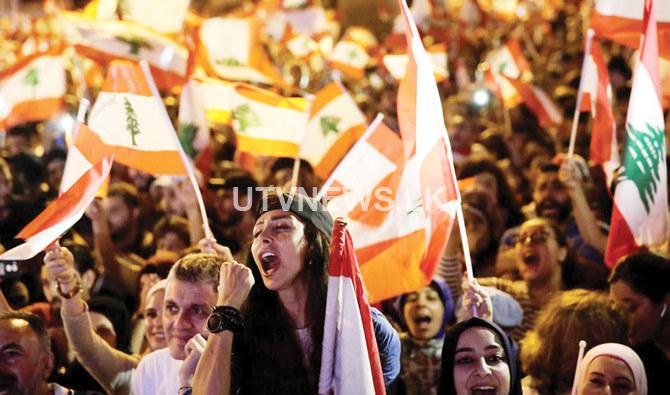 He told them: “Lebanese people, who trusted you and elected you in May 2018, trust you to reform the political, economic, financial and social imbalances and work along with the true revolutionaries, who have goodwill, to find solutions that guarantee a decent living for every citizen. Otherwise, resignation is more honorable.”

President Michel Aoun, Prime Minister Hassan Diab and Parliament Speaker Nabih Berri were told by Sater that “the people will explode after they get tired of the vulgar accusations between the responsible political leaders and the recrimination for gains.”

He added: “He who promotes intolerance and discrimination in his speech is neither a national leader nor a good official, and he who deems the homeland his and his children’s property, monopolizes power, practices tyranny and oppresses those who trusted him is not a leader.”

The three politicians met at Mar Maroun Church in Gemmayze in Beirut on Sunday to celebrate the day of the patron saint of the Maronite Church, Mar Maroun (St. Maron).

The celebration needed tight security to prevent protesters from approaching the processions. Activists are holding sit-ins in the squares close to the church.

During a meeting held a few days ago at the Baabda Palace, the Supreme Defense Council discussed measures to ensure MPs’ access to Parliament on the day of the session for giving confidence to the government formed by Diab.

While the council did not reveal its measures, which remain secret, concrete walls are blocking most of the roads leading to Parliament. The council left only one or two routes open for easy control.

Activist Mahmoud Fakih told Arab News: “The activist groups in the civil movement will try to prevent MPs from reaching Parliament to give confidence to a government that does not meet our ambitions.

“Arrests of activists also continue in an attempt to intimidate people and prevent them from expressing their pain,” he said, adding: “We are betting on recharging the street as there is increasing pressure on people’s livelihoods.”

The new government faces strong financial pressures, including benefits to pay off state debt next month, an acute shortage of dollar liquidity leading to a decrease in confidence in banks — which continue to increase their strict restrictions on capital movement — the continued weakening of the lira and rising prices.

The extent of the confidence that the government will gain in Parliament is set to greatly impact its work, especially since the main forces supporting it are concerned about the possibility of a decrease in the number of votes it will receive in light of the negative echoes of the ministerial statement that the government has put in place.

Activists believe the government’s plan does not include listening to protester demands.

Nizar Hassan, a researcher of social movements, told Arab News: “We have put in place a ministerial statement as an alternative to the government’s. We do not want to be accused of rejecting it for the sake of it. We have clear alternatives and a work program that serves as a basis for our opposition.”

Hassan revealed that “the alternative statement was discussed in the protest tents in all regions and has been revised to represent every activist group, therefore voicing demands regarding the economic affairs and serving as their language and focus of their demands.”

Some of the demands put forward include reversing all tax increases approved within the budgets of 2019 and 2020, imposing a progressive tax on wealth, abolishing the Bank Secrecy Act and waiving the immunity of MPs and ministers. (Courtesy – Arab News)