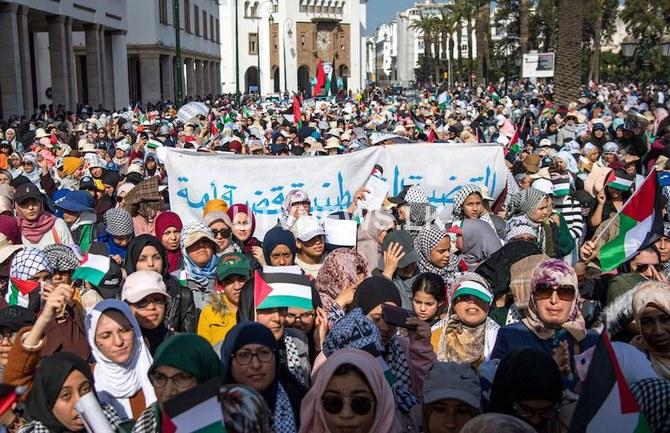 (UTV|RABAT) – Thousands of demonstrators flooded the streets of the Moroccan capital Sunday to protest against a new US Middle East peace plan which the Palestinians say favors Israel.

They called for a boycott of American products, denounced the United States as “enemies of peace” and chanted “Palestine is not for sale.”

Some of the demonstrators, who wore red-black-green-white scarves in the colors of the Palestinian standard, burned an Israeli flag and spoke against any attempt by Morocco “to normalize” ties with the Jewish state.

Morocco has warming but quiet relations with Israel, and no formal diplomatic ties.

Israel and Morocco opened “liaison” offices in each other’s countries in the mid-1990s but Rabat closed them after an escalation of Palestinian-Israeli violence in 2000.

Elsewhere in North Africa, hundreds of Tunisians also protested Sunday against the US peace plan, in the eastern city of Sfax, an AFP journalist reported. Tunisia’s powerful UGTT labor union, which organized the march, called the proposal an “accord of shame.”

Last month US President Donald Trump unveiled his Middle East plan for peace between Israel and the Palestinians which the Palestinians have rejected as biased in favor of the Jewish state.

Under the plan, Israel would retain control of the disputed city of Jerusalem as its “undivided capital,” and annex settlements on Palestinian lands. Palestinians however want all of east Jerusalem to be the capital of any future state.

The plan has also been rejected by the Arab League and the Organization of Islamic Cooperation — two bodies in which Morocco is a prominent member.

After Trump unveiled the plan, the foreign minister of Morocco, a key US ally, said Rabat “appreciates the constructive efforts for peace deployed by the US administration for a durable solution in the Middle East.”

Nasser Bourita went on to reiterate that Morocco’s position is to support the creation of an independent Palestinian state with east Jerusalem as its capital. (Arab News)